Behind the Build: The Titan Games 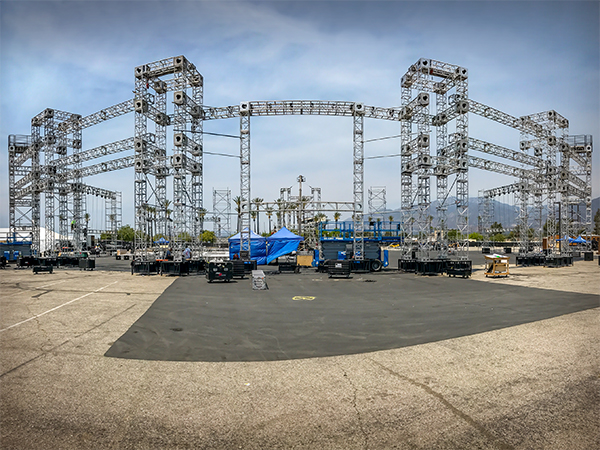 The Titan Games is an athletic competition series hosted and created by Dwayne Johnson. During which everyday people compete in the Titan arena, built by All Access.

All Access provided nearly everything (excluding the scenery and the game challenges):

The show’s designers started with a larger-than-life concept. To transform the Irwindale Speedway parking lot into a massive arena for audience and gameplay. The pre-production planning phase began at the beginning of July 2018, followed by load-in. The installation for our structure happened over a two-week period in early August and scenic dressed it over the coming weeks. They shot the first season during the second half of September.

Because of the venue, we had to build everything from the ground up without the assist from an overhead rigging company.

At the beginning of the Titan Games installation, a heatwave hit Southern California. This pushed the location’s temperature to 113 degrees for days on end – not ideal working conditions. We also had to revise the artists’ concept to accommodate safety features and anchors for the structures to withstand 70 MPH winds.

Halfway through the installation, production asked All Access to also provide the finished surface and contour of the slides. We were also tasked to create an economical solution with our standard decking and Plexiglas railing to solve the problem.

We worked closely with production and our friends at LADPW on the Universal Studios lot to help us coordinate with the City of Irwindale.