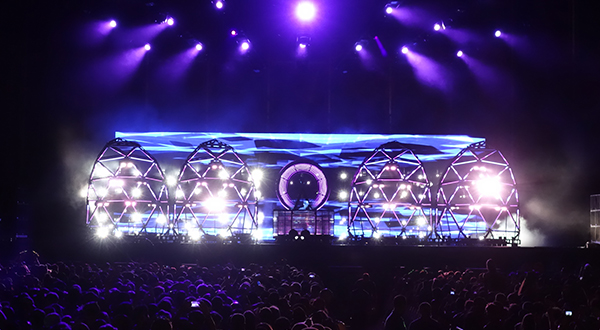 Joel Zimmerman — best known by his stage name, deadmau5 — had kept eager fans awaiting the release of his new live show format. On Saturday, June 6, the Canadian producer and DJ finally unveiled his new setup at the Governors Ball in New York City.

The new setup is a lot like other EDM shows, with plenty of video, strobe, and lights — plus something else, the Thunderdome (aka the “Mau5 Trap”).

Zimmerman came up with the vision for the Dome. He worked with production designer Roy Bennett, who brought in All Access Staging & Productions for the execution. All Access built the Dome, as well as the automated inner video pod (aka the Mini Dome), three custom automated DJ tables, video and lighting LED integration, and cable management.

The show begins with the Dome as a complete geodesic dome, lit up with LED. The Dome breaks into four pieces, revealing the Mini Dome (integrated with Color Kinetics iColor Flex MX), which moves straight up and tilts back to reveal deadmau5 at his custom DJ table, sporting his signature “mau5 head.”

Zimmerman is reportedly most impressed with his new custom DJ table, which is actually three electrically controlled tables that go up and down as needed, allowing him to sit and also stand.

All Access president Erik Eastland, who was the project’s design engineer, describes this build as “one of the most unique and challenging.” Because of the layered, complex nature of a geodesic dome, a significant amount of time went into R&D and engineering. The All Access team had to design the Dome’s framework to be functional as a touring piece and also be compatible with Upstaging’s LED Saber product. Eastland and his team spent six weeks engineering and building the products.

The DJ’s previous cube format, another All Access project, had a nearly five-year long run, so we can expect to see the Dome as a deadmau5 fixture for quite a while.

For more show photos, check out the deadmau5 gig. To find out where deadmau5 will be performing next, see his 2015 schedule.