Boxing is back, and it’s epic.

In the world of professional combat sports, boxing has seen a marked decline. On Sat., March 7, at the MGM Grand Garden Arena, boxing made its official return to prime time. With the inauguration of Premier Boxing Champions (PBC), it seems that boxing has made a comeback.

Al Haymon, creator of PBC and longtime boxing manager, sought to give new life to the sport of boxing; this event marked the first time in 30 years that NBC has aired a boxing match. All Access Staging & Productions is honored to be a part of such a game-changing event.

The traditional image of boxing is a brightly lit ring in the center of a dark room. In recent years, boxing has been upstaged by more compelling and visually striking fighting events. (No pun intended.) 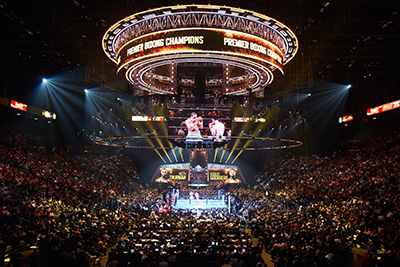 Haymon recruited the expertise of Bruce Rogers of Tribe, Inc. and All Access to execute his larger-than-life vision, which included the massive main stage, called The Wall of Thunder, as well as the immense scoreboard hanging above the boxing ring. 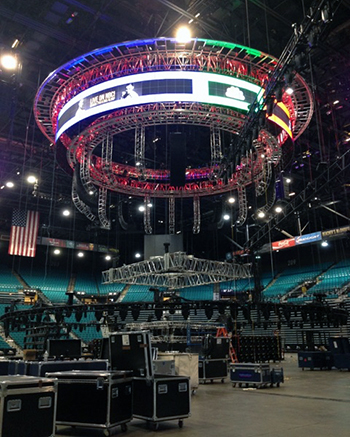 The scoreboard, named The Death Star, is certainly befitting its name. Towering above the boxing ring, the massive structure is made up of several large rings – the camera truss ring, the scoreboard and lighting grid ring, the soffit ring with the mother grid, and finally, The Ring of Honor.

All Access was responsible for all the staging structures and scenic features for the event, including The Wall of Thunder, The Death Star, custom scenic truss, mother grid, lighting truss, custom PA hangers, video support, the NBC broadcast desk, and all the structural and scenic elements that went into the athlete warm-up rooms.

All Access is particularly excited about the athlete warm-up rooms, aptly named The Red Room and The Blue Room. They are much more than dressing rooms; the ultra high tech yet comfortable rooms offer anything a fighter might need to warm up and prepare for a fight.

The premier event, in which Keith Thurman defeated Robert Guerrero, brought in huge ratings for NBC. With viewership peaking at 4.2 million, PBC became the most watched fight broadcast since 1998.

Berto vs Lopez and Porter vs Garcia